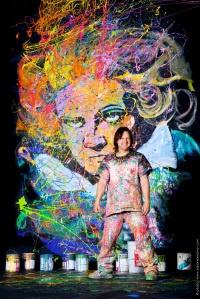 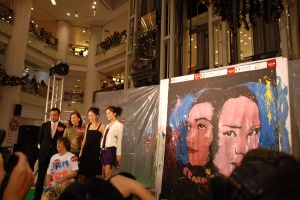 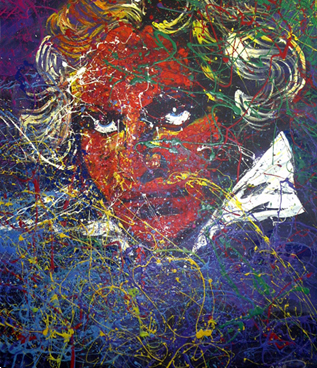 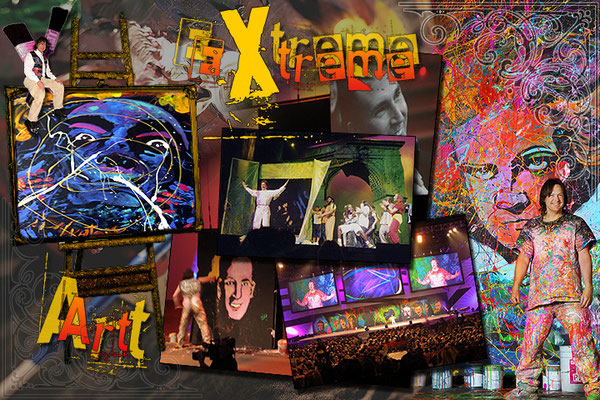 Born in Namur, Belgium, ACTION PAINTING LIVE discovered his passion for art at an early age. Painting was his father's hobby, and on vacations with his parents in Spain and the South of France Jean would watch the local artists create on-the-spot portraits for tourists. In 1975, after a chance meeting in Figueras, Spain with the flamboyant artist Salvador Dali, ACTION PAINTING LIVE realized that the quiet life of the studio artist was not for him.


In 1976 he enrolled in the Academy of Beaux Art in Belgium - best known as the school of painters Jan van Eyck, Brueghel, Rubens, Magritte, James Ensor, Alechinsky and others - to develop his talent along more formal lines. Upon completion, he enrolled in the Academy des Beaux Arts de Paris, known over the years as the birthplace of numerous art movements, the base of Academic painters Messonier and Jean Baptiste Edouard, and the school of impressionist painters Claude Monet, Vincent van Gogh, Jean Francois Millet, Paul Gauguin, Henri Matisse, cubist Pablo Picasso, surrealist Salvador Dali, conceptual artist Ben Wautier and performance artist Yves Klein.


ACTION PAINTING LIVE  desire for adventure led him to travel widely. In 1982, he packed his bags and art supplies and traveled around the world on a sailboat, painting thousands of paintings along the way. The Caribbean, Hawaii and Tahiti were his new themes and his boat made a perfect studio.


"I always painted in front of an audience to music. In school I was faster than everybody else", says Jean. Searching for a methodology that would harness his technical skills and allow a rapid, spontaneous style of work, he created his show in the early 1990's. Working with explosive energy and without preliminary plans or sketches, Jean uses forceful strokes of vibrant color to fill large canvases in minutes. He explains that working at this rapid pace opens a more direct channel between the image in his mind and the motions of his hands, giving the finished work greater immediacy and power.


In 1997 ACTION PAINTING LIVE was asked to perform in the show "Madhattan" at the New York New York Hotel & Casino in Las Vegas. That engagement resulted in other invitations from producers and event planners in several countries. In 2000, he was named the Spotlight Awards Entertainer of the Year for the special/corporate event market.
BEST ONE MAN SHOW 2006
BEST ACT IN LAS VEGAS 1998-1999
BEST PERFORMANCE ARTIST 2006
ENTERTAINER OF THE YEAR 2000-2007
BEST SOLO ARTIST 2006
GOLD MEDAILLE ACADEMIE DES BEAUX ARTS 1978


Furthermore for companies like Microsoft, British Petroleum, Wal-Mart and Jean has also performed at private functions for the Sheik, Sultan of Brunei, King Bauduin of Belgium, Prince Charles and Lady Di, three US presidents and even the pope, John Paul.

ACTION PAINTING LIVE  has shared the stage with celebrities like Muhammad Ali, Tiger Woods, Lance Armstrong, Gregg Norman, Richard Petty, the Doobie Brothers, Joe Cocker, Patti Labelle, Bo Diddley, Al Green, Air Supply, Jay Leno, Gianni Versace, Jimmy Carter and the Rolling Stones.
ACTION PAINTING LIVE has painted Art paintings as large than 60' by 40' and performed for a crowd of 150,000 at Parc des Princes in Paris for the European Cup. He has appears on 48 television programs in more than 30 countries around the globe; Live on Larry King, the Morning Show and 60 minutes are just a few national examples.

ACTION PAINTING LIVE has painted Lance Armstrong at the finishing line of the Tour de France on the Champs Elysee, presidential contender Al Gore and President G.W. Bush at the Republican and Democratic convention.
He performed in the Middle East for the USO and also helped raising millions of dollars for charitable causes serving the Heart Society, The Cancer Foundation, Hurricane Katrina and 911.