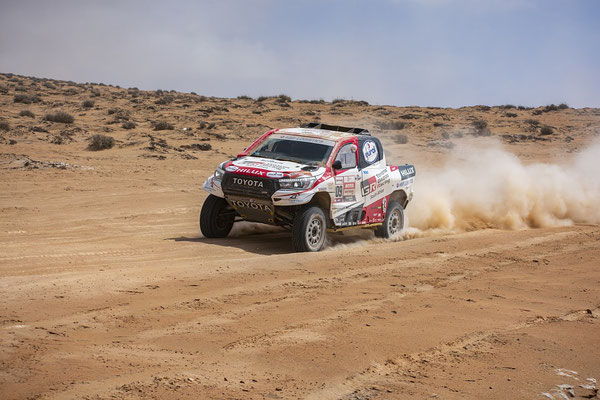 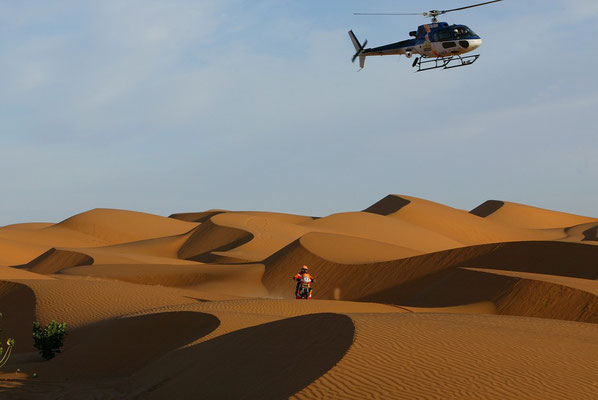 JUTTA KLEINSCHMIDT – First woman ever who has ever taken outright victory in the most difficult and longest rally of the world, the Dakar Rally

The trained physicist is on of the most successful ladies in global motorsport. She is the first and so far the only woman who has ever taken outright victory in the most
difficult and longest rally of the world, the Dakar Rally.
In her lectures, Jutta Kleinschmidt motivates her audience to trust themselves and the team and to enter risks to succeed. In her lively and capturing style, she tells how she managed to succeed in a man's world with plenty of effort, stamina, ambition, creativity and courage.


The public gets an inside view of how JUTTA KLEINSCHMIDT always motivates herself and her team for new challenges and how setbacks have positive impacts as well.  She uses her experience gained in borderline situations.


The extremes are her passion : Since 2004, Jutta Kleinschmidt has a licence as a helicopter pilot. She is also fascinated by sports biking: In 2003, she crossed the Alps on her bicycle and in 2004, she contested the Race Across America cycle competition and the Ötztal Marathon.


JUTTA KLEINSCHMIDT offers new approaches and inspirations to her public for both personal and professional aspects of life. Jutta Kleinschmidt has many years of experience as a speaker. Profit from practical examples for your daily business and use Jutta Kleinschmidt's experience to achieve your own goals!

PROGRAMME
• Video impressions
• Factors for success presented in an entertaining way and with personal
experience
• Upon request followed by questions and answers
• length of lecture: 30 to 90 minutes
• Languages: German and English
• Subjects and duration of lectures
according to prior agreements

EXAMPLES FOR TOPICS
• „Challenges - the foundation stone of success“
• „Passion to Perform“
• „The adventure of desert rallying - an entertaining look behind the scenes“
• „Winning the most difficult rally in the world - how to succeed“
• „Dakar Rally - what have top sport and business got in common ?“
• „Win and defeat - how to motivate my team and myself ?
• „You achieve what you really want - success through mental strength“
• „Successful acquisition of sponsors - what matters ?“
• „Technical aspects of cross-country rallying - requirements for men and machines“
• „Navigation in rallying - the right direction to the finish“


Jutta is one of the most, if not the most, successful woman in global motorsport. She is the first and so far the only woman who has ever taken outright victory in the longest and toughest rally in the world, the Dakar Rally.


Raised in Berchtesgaden (Germany), her youth was dedicated to winter sports. At 18, she bought her first motorbike, in order to go on adventure trips. Challenges, competition and motor technology are her passions. Her racing career started on motorcycles. In 1988 was her first participation in the Paris Dakar Rally on a BMW HPN.


The 1992 Paris-Cape Town Rally was the 14th running of the Dakar Rally event with a unique routing. The rally was the longest version ever with a 7,722-mile (12,427 km) long route, starting from Paris, France, on 23 December 1991 and finishing after 24 days at Cape Town, South Africa. Jutta finished 23rd overall in the motorbike classification on a Standard BMW R100 GS.


After completing her physics degree and six years experiences as an engineer at the research and development department of BMW, she left her job to concentrate on motorsport.
After a career of seven years on a motorbike in the Cross Country Worldcup, she changed to four wheels in 1995, and became involved in the development of the most successful rally car, the Mitsubishi Pajero Evo, in which she won the Dakar in 2001. She then moved on to join the Volkswagen Works Team and developed a totally new rally car, the Race Touareg, that she also competed in.


In addition to motorsport, Jutta loves all manner of challenges. In 2004 she participated in the Race Across America. Together with teammate Joey Kelly she cycled 3,000 Miles across America in just eight and a half days. Since 2004, she owns and pilots helicopters. After 17 Dakar participations with six Top-5 finishes in the overall standings, Jutta Kleinschmidt today passes on her experiences as a motivational speaker for international companies. To complement this, she wrote her book „Mein Sieg bei der Dakar“.
She offers new approaches and inspirations to her public for both personal and professional aspects of life. Jutta Kleinschmidt has many years of experience as a speaker. The audience profits from practical examples for their daily business and use Jutta Kleinschmidt’s experience to achieve their own goals !


JUTTA KLEINSCHMIDT can also be booked for lectures about “Modern car technology”. As jury member for one of the biggest car magazines in Germany she tests and evaluates every year the latest cars inclusive E-vehicles and the more and more coming Digitization in the automotive industry
Furthermore she tests regularly electrically powered sports car on racetracks. She was Sport director at the e-CROSS Germany, a rally and roadshow for electric vehicle. 2016 she participated at the WAVE Trophy, the biggest E-Mobil-Rally worldwide.

In her outreaching career she has won the following prices :


JUTTA KLEINSCHMIDT has joined the FIA after more than 30 years of experience in cross-country rallying. Jutta Kleinschmidt is the President of the FIA Cross-Country Rally Commission and additionally acting as the FIA Senior Advisor for Cross-Country Rally on a part-time basis. She is setting out the strategic vision and she participates in the development of Cross-Country Rallies.


Jutta Kleinschmidt has been also part of the FIA Women in Motorsport Commission since 2016. Jutta founded and led the project “WIMC-QMMF Women’s Cross Country Selection”, the first race driver selection camp to encourage more women into motor sport. At present she is involved as a Sport coordinator in the FIA European Young Women Program, „The Girls on Track Karting Challenge".
She also supports the FIA Smart Driving Challenge as a team leader.
In Germany, she works as a consultant for the Deutschland Rally, on behalf of the German Automobile Club ADAC e.V. In addition, she has been a member of the ADAC Foundation’s Board of Trustees since 2016.