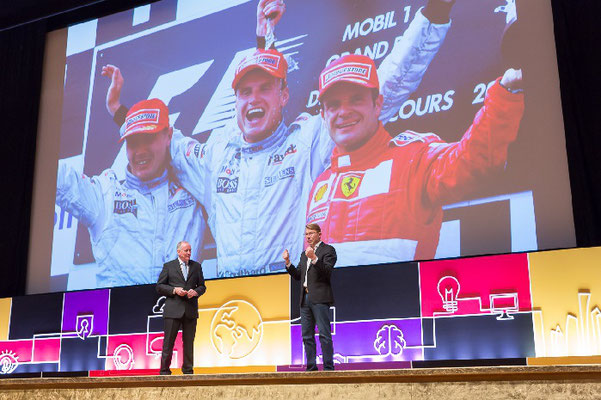 Twice winner of the FIA Formula One World Championship, MIKA HAKKINEN won the hearts of fans around the world with his speed, focus and dramatic driving style. Famously described by 7-times World Champion Michael Schumacher as being the only driver he truly feared, Mika’s battles with a German ace are still talked about in F1 circles.

Actively involved in the sport including as a brand ambassador for McLaren, the team with which he won both titles, Mika enjoys talking about the importance of team work, focus, mindfulness and the combination of talent and technology required to win. As a 20-times Grand Prix winner, he knows more than most about what it takes to win - and keep on winning.

One of the sport’s real superstars, Mika enjoys sharing the experiences gained during his formidable career, including surviving a life-threatening accident at the 1995 Australian Grand Prix. Originally team mate to the legendary Ayrton Senna, his is a story worth listening to.


Double Formula One World Champion MIKA HAKKINEN scored back-to-back titles in 1998 and 1999 as lead driver for the all-conquering McLaren-Mercedes Benz team, achieving unprecedented success in a career almost ended by a serious accident crash at the Australian Grand Prix in 1995.  With 20 Formula One race victories and 51 top-three podium finishes to his credit, he ranks among the most successful drivers of all time.

From his very first Formula One drive in an uncompetitive Lotus in Phoenix in March 1991, it was clear that Hakkinen possessed the talent to reach the top. The blond Finn with a quiet, highly-focused personality, was a graduate of karting and the Opel Lotus Euroseries, and won the British Formula 3 Championship in 1990.

At the end of 1992, MIKA HAKKINEN was signed as test driver for the 1993 season by McLaren, whose front line drivers were Ayrton Senna and Michael Andretti. When Andretti returned to the United States in September, Hakkinen took his seat and celebrated his F1 debut by out-qualifying the great Senna in Portugal.Hakkinen’s performance was an indication of his real potential. He spent 1994 and 1995 developing his skills, taking over as team leader when Senna left for Williams, and the arrival of Mercedes-Benz power gave him a car in which he could show his capabilities.

He won his first Grand Prix at Jerez in 1997 and from that historic moment he never looked back, collecting his first World Championship in style in 1998, winning eight of the 16 races. Although 1999 was a far tougher year, he came back strongly when it mattered, scoring a further five Grand Prix victories en route to retaining his crown at the final race of the season. By then he was well established as the only man capable of challenging Michael Schumacher, and the German star publicly recognised this fact.

Hakkinen’s confidence in racing Schumacher wheel-to-wheel was most famously illustrated by a 300kph overtaking manoeuvre at the exit of the daunting Eau Rouge corner during the Belgian Grand Prix in 2000.  Today it remains a defining moment in the story of the Hakkinen-Schumacher duel.In 2000, however, Ferrrari produced a very strong car and although Hakkinen won a further four Grands Prix, the World Championship went to Schumacher, the first of his five successive titles for Ferrari.

Further victories in the British and United States Grands Prix in 2001 demonstrated that Hakkinen’s performances remained at their peak, but another accident in that same year made him opt to take a sabbatical in 2002, and he subsequently decided not to return to Formula One. MIKA HAKKINEN thus retired from the pinnacle of the sport at the relatively early age of 33.  He would later return to racing, in 2005, when he competed for Mercedes-Benz in the DTM, German Touring Car Championship, and he remained for three seasons before finally hanging up his racing helmet at the end of 2007.Today he remains closely involved in Formula One through a number of brand ambassadorships and business interests within the sport, and is regarded as one of the most accomplished drivers of the modern era.