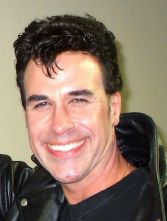 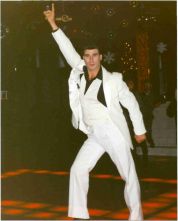 With many years of experience in the lookalike industry this JOHN TRAVOLTA LOOKALIKE, sound alike and dance alike does a totally interactive show. You can have either the "Tony Manero" character from the hit movie "SATURDAY NIGHT FEVER" or the "Danny Zucco" character from the hit movie "GREASE" or both. Either performance will have your guests excited, interacting and talking about your party. Between his strong resemblance to John Travolta and his mirrored personalities of the characters you will think the star is really there! Whatever character you choose JOHN TRAVOLTA LOOKALIKE can portray 100%. After over 14 years of impersonating John Travolta he has perfected Travoltas characters. He is simply the best!

JOHN TRAVOLTA LOOKALIKE not only looks and sounds just like Travoltas characters but his body language is also the same as any of the characters. The combination of these lookalike qualities is what impresses his guests so much and thats what makes his parties and events so successful. His show which is approx. 23 minutes long will get the crowd excited and bring back all the memories of those great times. Either the "GREASE" and/or, "SATURDAY NIGHT FEVER" shows can be performed. Dancing to the music from those great fun movies and keeping the crowd involved is what makes his performance so special.

JOHN TRAVOLTA LOOKALIKE has a special talent for crowd interaction and pleasing his audience. After he dances to the songs from "SATURDAY NIGHT FEVER" and/or "GREASE" he meets, greets, takes photos and mingles with your guests. He can also do other characters of Travolta but the two main ones are from the two hit movies "SATURDAY NIGHT FEVER" and "GREASE". You can hire him to perform, walk around with meet, greet and photo opts or you can have him for just a simple walk around only with meet, greet and photo opts. The choice is yours. Fees will vary of course if the performance package is chosen. This Travolta lookalike/soundalike grew up in no other place than Bay Ridge, Brooklyn so his natural personality is like that of the character Tony Manero" from "SATURDAY NIGHT FEVER". These Brooklyn built in qualities is what makes him a natural and so realistic. John Travolta actually came to Brooklyn to learn from guys like him about how to walk,talk and act like a "Brooklyn" guy for his hit movie "SATURDAY NIGHT FEVER".That's why he does the impersonation so well. The strong resemblance is the coincidental part! He always says ,"I am just imitating Travolta imitating me!" He also brings that personality into the "Danny Zucco" character from "GREASE" and portrays that character just as good.You will have a great time with either character.Satisfaction guaranteed! Impress your friends, family and guests at your next event.It will be a party they will never forget-and always remember. JOHN TRAVOLTA LOOKALIKE truly is the very best. That's the quality you want to have at you party or event. Please book as early as possible as dates can be held only with a signed contract. Looking forward to hearing from you.


JUST A FEW OF SOME TOP PAST CLIENTS HAVE BEEN : (IN NO PARTICULAR SEQUENCE)

* PLUS MANY MORE CORPORATE AND PRIVATE CLIENTS THAT ARE TOO LONG TO LIST!